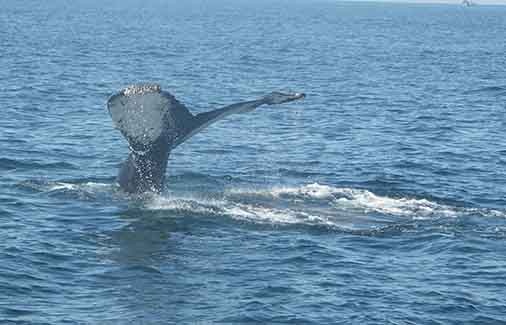 “The universe is full of magical things patiently waiting for our wits to grow sharper.” – Eden Phillpotts

I recently went on a whale watch. Conditions were just right, and we saw about a dozen of these amazing mammals. Several came surprisingly close to the boat, as if they knew we were desperate to get a good photo – especially the iconic fluke as they dived for more food.

This was perhaps the 10th time I’ve been on a whale watch cruise. I’ve been on tours leaving from the tip of Cape Cod, from the Boston Aquarium, the North Shore and Nova Scotia. One boat was even smaller than the leviathans we stalked with our cameras.

Every time I see a whale, I’m amazed. Giant beasts gracefully gliding by the boats. They should only exist in our myths, but there they are, right in front of my eyes.

I don’t need to go out on the ocean to be amazed. I love to sit and watch the evening twilight. As the sun gets lower, Venus appears on the western horizon. Within moments, her brother planet – Mars – shows up in the east. Soon the twin giants, Jupiter and Saturn, take their places in the sky.

As the darkness increases, stars become visible, like neighborhood porchlights turning on at dusk. But these are no ordinary lights, but solar systems and galaxies millions, even billions, of light-years away. Some had already gone out of existence before our own planet was formed.

My street follows an east-west axis. Once a month, on my early morning walk, the road is lit by the setting full moon. The woods are changed into the magical forests of fairy tales. Reaching the end and turning around, I’m greeted by the dawn. The new day’s light transforms the woods yet again, with the vibrant colors of nature’s palette taking the stage.

It’s easy to become nonchalant about the world around us. The sun rose this morning, just like it did yesterday, and will again tomorrow. Distant planets are less noticeable than nearby problems. Actual streetlights garner more attention than starlight.

Or worse, we’re moving so quickly, we forget to take the time to stop and smell the roses. Not metaphorically, but literally taking a second to breathe in the delightful fragrance of flowers. Unlike the sun, those blossoms may not be there tomorrow.

Recognizing the fantastic and beautiful around us is a choice. We can deliberately decide to seek out the fantastic, or we can choose to focus on the mundane. We can embrace the wonder that inspires children and poets, or we can remain cold-blooded machines fixated on efficiencies.

The start and the end of the day. Nature – small and large. The same events, the same scenes, happening in front of billions of people on the same day. What we see is dependent upon more than our surroundings. Different attitudes, different focus, and different perceptions – all lead to our unique experiences.