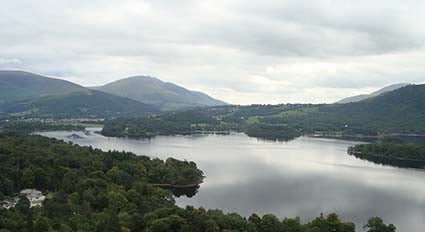 "The battles that count aren't the ones for gold medals. The struggles within yourself--the invisible, inevitable battles inside all of us--that's where it's at." – Jesse Owens

The older gentleman entered the dining room with a beaming smile. Before he had a chance to sit down, the server asked, “How did your son do?” The enthusiastic response, “He made it with 6 minutes to spare!”

We were at a bed and breakfast in the Lake District of England. A popular pastime of the region is hiking or “walking” the local mountains, known as “fells”. There are different challenges – called “rounds” – based on the number of peaks a walker can climb in a day. Usually the walker starts and finishes at a hall in the center of town. It appeared that this man’s son has just completed one of these challenges.

His table was next to ours, and I asked if someone had completed a “round”. He replied that his son had just hiked to the top of 4 peaks over 3,000 feet in less than 24 hours. His face and voice displayed an immense pride in the accomplishment.

As if on cue, his son entered the room, walking with a slow, stiff gait. Followed by the gentleman’s wife and daughter-in-law, who smiled proudly.

After finishing our breakfast, we walked over to shake the young man’s hand and wish him congratulations. With the same pride he had displayed earlier, his father interjected, “Do you know he reached the summit of 4 peaks over 3,000 feet in less than 24 hours?”

For the next few minutes, the family told their story. Starting off at the hall at 2 o’clock in the morning. The rain and sleet at the tops of several mountains. Helping other walkers who were lost. Waiting in a church in the middle of the night. The son – joined by his wife – running the last mile back to the hall to beat the clock, and reaching his goal with 6 minutes to spare.

While it was the walker who had conquered the 4 peaks, this accomplishment was shared by the entire family. Their support, concern and presence all went into the event. As a result, his success was felt by them all. It was wonderful to witness their joy.

It’s been said, “Life isn’t a sprint; it’s a marathon.” This story shows that life is neither.

Finishing a marathon is a significant accomplishment. Before getting to the start line, a person has to run hundreds of miles. Training for hours, in the rain, the cold of winter or the heat of summer. The race itself is a test of perseverance, with the body wanting to quit and the mind willing the runner to continue forward. Crossing the finish line is filled with emotion.

A marathon is a public event. The organizers provide support on the course with water stations, energy drinks and medical staff. A professional photographer captures the moment as finishers run under the banner and pass the time clock. Crowds line the street and cheer on the racers. Runners receive t-shirts when they register and a medal if they finish.

Most of our achievements in life are much more private. Whether it’s finishing an assignment at work or taking on a personal challenge. Except for the people closest to us, no one is aware of our feats. Any record of our activities is placed in our personnel file or tucked away in a family photo album.

During our attempt, we may feel alone and isolated. We reach out to co-workers, friends and families for support during our endeavors. Sometimes we may receive direct assistance in completing the task. At other times, it’s the knowledge that another person is aware of our struggle and cares about us. Those who provide support may also be the only ones who recognize our accomplishments.

Yet we still seek out new challenges. We find ways to test our strengths and expand our abilities. A new job. Proposing and leading a project at our company. Creating a piece of art or furniture for our home. Or scaling 4 peaks over 3,000 feet high in 24 hours.

No banner at the finish line. No t-shirt or medal. No record books. Just the personal satisfaction of achieving your goal with the support of others.