Lessons from 1999 – The Disaster That Didn’t Occur 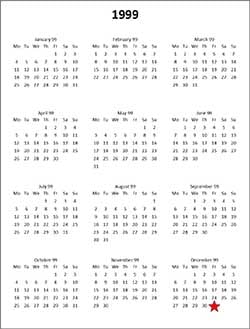 Persistence is what makes the impossible possible, the possible likely, and the likely definite.” – Robert Half

Three characters that haunted many of us in the late 1990s. If your job had anything to do with computers, many projects were pushed off to the side to make time for the “Y2K Project”.

Newspapers and magazines splashed their covers with stories of the potential apocalypse. The major news networks dedicated hours of programming explaining how individuals should prepare for the worst.

A brief summary – many computer programs formatted dates using 6 digits – MMDDYY. With only 2 digits for the year, many people were concerned that on January 1, 2000, computers would think that it was January 1, 1900. Programs would fail. Equipment that used computers would stop working. Power would go out. Communications would go down. Chaos would reign.

Armed with consultants and contractors, companies invested hundreds of billions of dollars to stave off disaster. Programs were rewritten to use 4 digits for the year. Old equipment was replaced. Contingency plans were developed.

In anticipation of systems collapsing, companies overstocked inventory. Not only the supplies needed to run the business, but stockpiles of prepackaged food and bottled water. Portable toilets were staged outside office buildings, along with fuel tanks to keep generators running.

On December 31, 1999, I was working for a global financial services company. Along with hundreds of coworkers, I wasn’t spending the evening at a party, but was at my desk. The cafeteria was providing a free buffet. Conference calls were held every hour with updates. It was already past midnight in Australia, Asia and Europe. So far, so good.

The clock struck midnight. Test programs were launched, and all equipment was checked. And then………

The lights stayed on. The phones worked. The programs ran as intended. All our equipment functioned. We all breathed a sigh of relief, laughed at ourselves, made one more pass through the buffet line and went home. There would be no Y2K Armageddon.

As the years, and then the decades passed, it’s been easy to make fun of all the concerns about Y2K and the disaster that didn’t occur. I still share stories about how we classified as many purchases as possible as “Y2K Requirements”. The smiling faces at 12:15am when everything was working properly and the tension broke. Using up all the excess inventory over the next 3 months.

It's easy to look back and dismiss the hype and concerns. Especially when very little actually went wrong. Of course, we don’t know how many problems didn’t occur because of the many programs that were rewritten to fix deficient codes, or equipment upgrades that kept everything working.

You may have serious difficulties affecting your own life. Caring for aging parents. Holding jobs in an unstable industry. Planning for a child’s educational future in the face of rising tuition. A struggle that is unique to your circumstances. It may feel that certain doom is pending.

We can apply the lessons from what happened 20 years ago to our lives today. The hype around Y2K wasn’t helpful. The planning and actions made a difference. The challenge wasn’t solved on December 31, 1999. Rather, it was solved by all the steps taken in the months and years before.

When faced with a seemingly insurmountable problem, there are 5 steps to follow:

Not every hardship is complicated or a potential disaster for ourselves and those around us. Whatever the problem, we can break it down to individual, manageable segments. With planning and resolution, we will be successful.