Go Bowling – A Lesson From My Mother 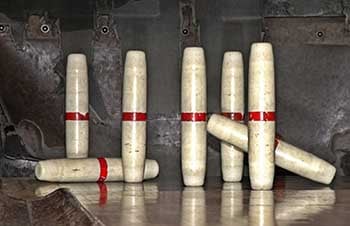 For as long as I can remember, my mother belonged to a bowling league. One night a week, she would spend a few hours away from the family and go bowling with her friends. One trophy she brought home on a regular basis was inscribed, “Perfect Attendance”.

When I was little, I never looked forward to my mother’s bowling nights. She protected me from my older brothers and sisters. Without her around, who would make sure we had an equal say on which TV channel we watched? And who would put their arm around us if we were afraid? (Not that I ever admitted I was afraid of anything.)

Over the years, we got used to “bowling night”. Even as a kid I could see how much my mother enjoyed the bowling league. Sometimes, my father or an older sibling would take us to the alley to see her for a few minutes. With bowling balls being hurled, pins crashing, and gates dropping, the bowling alley was an exciting place.

We’d find my mother’s team, and get our hugs in between frames. She’d always be smiling, whether she got a strike, a spare or even a gutter ball. Her friends would ask her which kids we were, and then tease me by calling me by my oldest brother’s name. It was the first time I can remember someone calling my mother, “Paula”. Wasn’t her name “Mommy”?

At Christmas, my father would help us pick out gifts for her, like a new bag or shoes. Once, we were able to buy her new bowling balls. In Massachusetts, we mostly have candlepin bowling, which uses several smaller balls instead of the single, large ball in tenpin bowling. (Note: The photos on Wikipedia are from my hometown lanes in Woburn, Massachusetts.) No matter the gift, my mother would tell us it would help improve her game. As she left for the next week’s outing, she’d show us that she was taking the gift with her.

When we were old enough, we joined a local kids’ league. On Saturday mornings, we’d walk to the bowling alley to bowl three strings. Because I was older, I was named a “Team Captain”. And I also received the “Perfect Attendance” trophy.

In high school, my physics teacher announced he was starting an intramural bowling league. I signed up right away. Imagine my surprise when we got to the lanes and it was tenpin bowling. I stuck with it, and found that I enjoyed tenpin as much as candlepin. On Sundays, one of my older brothers, Bill, took me tenpin bowling to help me improve my game. My mother even gave me a monogrammed tenpin ball for Christmas.

While I no longer belong to a league, I still go bowling now and then. Sometimes candlepin bowling and sometimes tenpin. For my birthday a few years ago, my wife reserved some lanes near the beach we were visiting. When I visit different cities, friends take me to their favorite lanes.

Bowling bridges the gap between a “game” and a “sport”. It’s physical, without being physically demanding. Bowling is played on a lane, but indoors, so weather’s not an issue. It requires equipment, but you don’t need to buy your own. You have to be ready when it’s your turn, but there’s plenty of time to eat and drink between frames. And bowling crosses all ages – kids, teens, adults and senior citizens.

Best of all, bowling is social. It’s a break away from the rest of the world. The noise of the game prevents any serious conversations and drowns out any cell phone ring. You celebrate when someone gets a strike. And laugh when your own ball ends up in the gutter.

In these times, we need a little distraction. Tensions can be high in the workplace. Tight budgets are forcing many people to cut back on vacations and nights out. Bowling is an inexpensive way to involve everyone in a fun activity.

Talk to your friends and co-workers. Start telling your favorite bowling stories (like the fact that a former business partner bowled a perfect “300” when she was 9 months pregnant). Find out who’s been to the local lanes. Schedule a night next week after work. Go bowling.

P.S. February 27th is my mother’s birthday. This year, she would have been 94 years old. I’m grateful that she was my first teacher of the little lessons of life.