Blending In or Standing Out

"Every individual has a place to fill in the world and is important in some respect whether he chooses to be so or not.” - Nathaniel Hawthorne

There are about 25,000 residents in my town. It doubles to 50,000 in the summer. There are 6.9 million people who live in Massachusetts, and approximately 329 million people in the United States. The planet Earth is currently home to 7.7 billion humans.

That’s an enormous number, and difficult to comprehend. A large football stadium holds about 75,000 people. Multiply that by 100. Then multiply that by 1,000. And you’re in the middle of those multitudes.

Sometimes, it can be comforting to be part of the crowd. Being surrounded by people who share the same passion, the same desires. Imagine being at a concert with your favorite artist on stage. The positive energy generated by fellow fans of the music.

At other times, it can be uncomfortable being in a very large group. Feeling lost or being swallowed up by the horde. Paths being blocked by throngs of people who don’t even acknowledge you while pushing and shoving to get where they want to go.

In either case, a question may enter our thoughts – “Do we blend into the crowd, or attempt to stand out?” Trying to decide whether to remain one of many or to exert our individuality. To emphasize our commonality or uniqueness.

It may be better to switch the focus from ourselves to those around us. To borrow from an old hymn, we should seek not to be seen, but to see. Specifically, to see “a person” instead of “people”.

It’s easy to look at a group and generalize about its members. Quickly make an assumption about the whole, and then assign that quality to everyone who belongs to the group. We could select a positive attribute that we admire, but too often we pick out the worst traits shared by the worst people. Once we adopt that prejudice, our point of view becomes distorted. 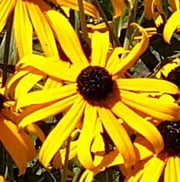 Instead, we can choose to focus on the individual. To see the singular person for who they are – their actions, their beliefs. Considering all the person’s characteristics allows us to better interact and engage with each other. We may find commonality where we thought none existed or learn something special that we didn’t know.

We want to be seen for who we are. We start by seeing the uniqueness of others.